Ok guys, let’s loosen our belts and talk about where to eat the best BBQ in Raleigh. Whether you live in Raleigh like us, or are just visiting and searching on your phone for the best barbecue places near me, don’t miss these four BBQ joints down below!

In case you don’t know what food is Raleigh known for, North Carolina is a big BBQ state and it’s so good here you can spell it four ways – Barbecue, Barbeque, Bar-b-que and BBQ.

No matter how you spell it, enjoying a plate of barbecue in Raleigh is one of those “welcome to the South” moments all meat eaters should experience and one of the top things to do in Raleigh.

Barbecue in North Carolina (and Raleigh) is a tradition and a celebration and something they take very seriously the state capital.

They eat it at restaurants, from food trucks, at college football tailgates, at festivals, in backyards, at picnics, pretty much anywhere!

What kind of BBQ is North Carolina known for? As an essential part of North Carolina’s DNA, it comes in two forms: Eastern and Lexington styles.

Because we live in Raleigh, today we’re going to focus on Eastern style, in which they slow cook the whole hog over hot coals, then pull the meat, maybe give it a little chop, and dress it with vinegar base sauce.

Typically, Eastern style is served as a sandwich or a plated dish, with all the traditional Southern sides you can handle and many of the locals like to wash it down with sweet tea.

So, let’s talk about where to eat the best BBQ in Raleigh, where the locals love to eat their ‘cue.

NOTE: we’ll be adding to this list of BBQ spots in Raleigh to include more places around the Raleigh area and Wake County once we have personally eaten there. Subscribe to our email so you don’t miss the updates!

The Pit Authentic BBQ is without doubt one of the most popular BBQ Spots in Raleigh. As their name suggests, they proudly serve authentic whole-hog, pit-cooked Eastern-style barbecue, accompanied with all the traditional Southern sides you can take.

Located in the awesome Warehouse District near the heart of downtown Raleigh, I’ve dined here several times and always walk away feeling more than satisfied and longing to return!

I personally love their Beef Brisket and Baby Back Ribs, but their top seller is their Whole-Hog Chopped Barbecue made the same way it’s been made in Eastern North Carolina for the last 300 years – slow cooked over hot coals for 12 hours, chopped together and sauced with their spicy sweet Eastern North Carolina barbecue sauce!

The burger is phenomenal. I mean, look at that thing. It tastes as good as it looks and they had to basically roll me out of there, and it easily makes my list of the best burgers in Raleigh.

You’ll definitely want to eat at the Pit more than once so you can try all their BBQ, their sides, and their burger!

Staff are friendly and knowledgeable, they often have live music outside, and I recommend it as one of the best Raleigh restaurants downtown.

The Pit Raleigh is one of your above-average barbecue restaurants in style and appearance, more than a typical whole-in-the-wall BBQ joint you may be used to, even serving craft cocktails.

They serve biscuits and hush puppies with the meal. Prices are fair, and there’s a good beer list. The Pit BBQ is definitely one of the best BBQ joints in Raleigh.

One of the best hidden gems in Raleigh and one of those classic hole-in-the-wall roadside BBQ joints is Olde Time BBQ. This was our first barbecue experience in North Carolina when we first relocated to Raleigh back in 2004.

A local friend of ours who grew up in Raleigh took us here for our introduction to barbecue joints in Raleigh, and the locals always know best when it comes to true Southern eating experiences!

Located slightly out of downtown on Hillsborough Street further west from NC State University (but still inside the Beltline), Olde Time BBQ will make you feel like you’ve stepped inside someone’s home that’s been untouched for decades.

Greeted by the friendly staff, upon seating you’ll be delivered a serving of Hush Puppies whilst you choose between plates of barbecue and sandwiches – remember to save room for one of their desserts made fresh everyday (especially famous is their banana pudding).

We went with one of their combination plates of Eastern NC Chopped BBQ and Ribs, accompanied with Collards and Boiled Cabbage.

The ribs were so tasty we didn’t even need the sauce, and the pork was cooked perfectly and also flavorful – you can literally taste the vinegar without the sauce.

And apparently their breakfast is one of the best kept secrets in Raleigh with generous portions – we’ll have to go back for that!

When you visit Raleigh, definitely put Olde Time BBQ on your list of best BBQ Spots in Raleigh to try!

Step back in time at Clyde Cooper’s BBQ, a Downtown Raleigh institution since 1938 and one of the oldest Raleigh restaurants.

From the moment I walk in the door and take in the old school decor, ambience and memorabilia I immediately get the feeling that this is Raleigh, that I’m in the South, and in a state where BBQ is a tradition Clyde Cooper’s does it better than most.

Besides the atmosphere, their food is the main reason it’s one of the longest-running barbecue joints in North Carolina and it’s hard to go past a plate of their chopped barbecue and fried chicken, accompanied with collards or their famous Brunswick stew.

You will get a full tummy of tasty barbecue eating here, but you won’t need a full wallet. They say it’s the best BBQ in downtown Raleigh for the price, and continuing with the old-school vibe they’ve only just started accepting credit cards, previously cash only!

Beloved by locals, celebrities and even past Presidents (check out their wall of fame), sit in one of their booths with friends or a counter seat and enjoy some of the best bbq in Raleigh, and each dish comes with a serving of their popular Hush Puppies!

A downtown Raleigh staple in a square room with counter seats, booths and tables. A casual and relaxed atmosphere. Good size portions for the money. Nostalgia.

So if you’re looking for a Raleigh landmark, put Clyde Cooper’s on your top barbecue joints in Raleigh list to visit.

The famous Sam Jones BBQ recently opened in Raleigh in early 2021 and if you’re from North Carolina and know your barbecue, you’re probably well aware that Sam Jones out of Winterville, NC has some of the best BBQ in North Carolina.

The Jones family name in BBQ goes all the way back three generations when Sam’s grandfather, the late Pete Jones, opened the legendary Skylight Inn in Ayden, NC at age 17 in the summer of 1947.

At their new location on W Lenoir Street in Downtown Raleigh, they smoke whole hogs on site every day and opened to much fanfare from locals in the know and some positive restaurant news is a refreshing change in what has been a challenging past 12 months for the industry for obvious reasons.

Famous for their chopped BBQ, fried chicken and baked flat cornbread, as a family of four we ordered 3 lbs. of ribs to share, their chopped BBQ plate, and for sides slaw, collards, baked beans, cornbread and Mac and cheese.

For our first experience, Sam Jones BBQ didn’t disappoint. This is North Carolina BBQ at its finest.

The chopped BBQ was juicy and flavorful. The smoked ribs tender, and that finely chopped slaw I envision is like what Grandma used to make. And our kids gave the baked beans and Mac and cheese a big thumbs up!

Sam Jones has instantly become one of my favorite BBQ joints in Raleigh, and I’m excited to go back and taste all their offerings as it’s an easy walk from my co-working space at Raleigh Founded in the Warehouse District.

I really want to try their sweet potatoes muffins!

Indoor and outdoor seating. We enjoyed sitting outside in the sun on one of their picnic tables on the grass. Inside there’s seating at the bar and several dining tables.

Super friendly staff and fast service. And get your pic taken in front of the NC plate.

When you’re in Downtown Raleigh and asking “where to eat the best BBQ Raleigh”, you’ll be happy you visited Sam Jones.

Related Post – Where to eat the best breakfast in Raleigh 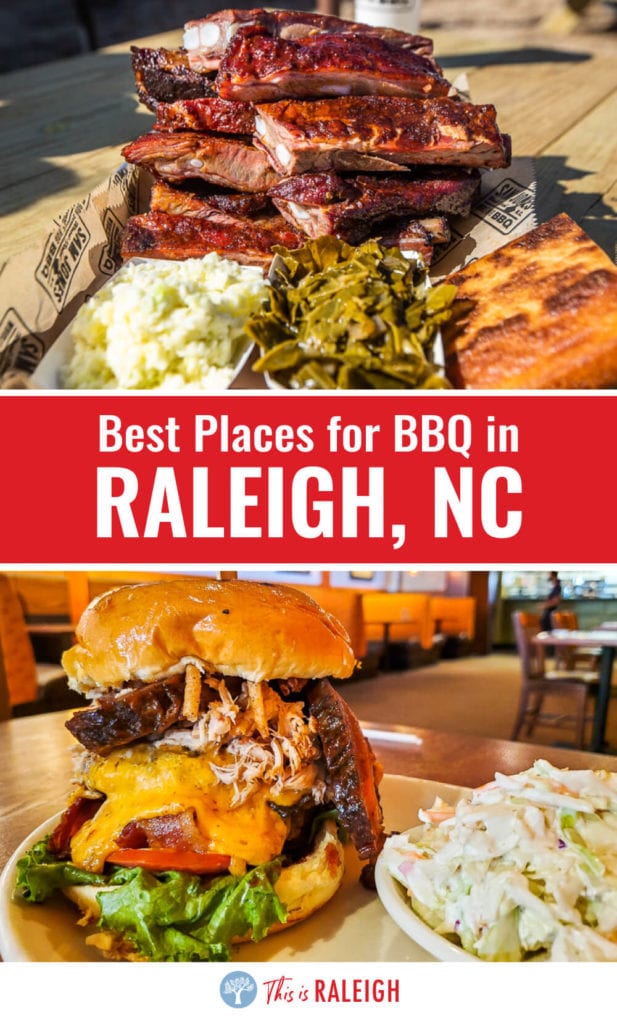 Craig Makepeace is the co-founder and publisher of This Is Raleigh. Originally from Australia, he first moved to Raleigh in 2004 and fell in love with the city of oaks. He's a travel addict, sports fanatic, beach lover, and passionate craft beer drinker!

Hi, we’re Caroline and Craig Makepeace, an Australian couple who have traveled to over 50 countries and lived in 5 and chose Raleigh as our home. Our mission is to help you connect to the spirit of this community and share the best things to do. Allow us to be your local guides.
Read More…

If we've helped you in any way, you may want to: